Kip Wightman is used to lending his voice to the airways, but now he’s using it to speak up about men’s health.

Kip said he hoped that through his role as an ambassador he could help reduce stigma and get men talking about their health, while raising awareness of the lifestyle factors that can reduce people’s risk of cancer.

“Like most Australians I’ve lost family to cancer – my Grandfather, in particular, was exactly the type of person men’s health messaging is trying to reach,” he said. 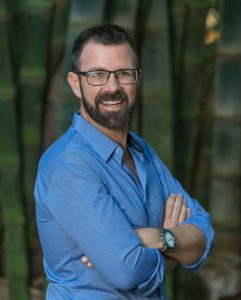 “He stayed quiet about any health issues, he drank too much, ate too much junk food and never seemed to care about his health until it was too late.

“As someone who works on the radio, as well as television, I’ve become accustomed to talking about so many aspects of my life publicly, including some I once would have considered hugely embarrassing; the more I do it, the less self-conscious I am about it and I think the same goes for men’s health.

“It’s just so important that men talk about their health and become aware of their risk of cancer, so if I can start even one conversation it’s worth it.”

At least one third of all cancer cases can be prevented through healthy lifestyles habits.

Kip is walking the walk in his role as an ambassador, taking steps to improve his own health.

“I make a real point of exercising at least three times a week, giving myself fitness goals, as well as eating the right foods to fuel my body’s needs to reach those goals,” he said.

Cancer Council Queensland CEO Ms Chris McMillan said Men’s Health Week was the prime opportunity for men to get informed and reduce their risk of preventable cancers by taking small steps to improve their health.

“Men have the power to change their outcomes and close the health inequalities between men and women – and that starts with healthy habits,” Ms McMillan said.

“Your daily habits can make a huge difference to your short-term and long-term health and can reduce your risk of cancer.

“Consider quitting or avoiding smoking, reducing your consumption of alcohol, improving your diet and exercising regularly, along with being SunSmart and if eligible, participating in the National Bowel Cancer Screening Program.

“Not only will these changes improve your health, but you’ll have more energy, more disposable income and more time to spend with friends and family.”

Cancer Council Queensland is committed to making the healthy choice, the easy choice, so to coincide with Men’s Health Week has updated its men’s health resources. Get informed or join Kip in sharing your health journey at cancerqld.org.au/menshealthweek.

Men’s Health Week provides a platform for challenging and debating key issues in men’s health and to raise the profile of men, their health outcomes and health needs around the country each June.

In addition, men are two to three more likely to drink alcohol at risky levels, with a third of all males drinking at lifetime risky drinking levels.

For more information on men’s health or men’s cancers members of the general public can call 13 11 20.