Home / News / Get familiar with ovarian cancer symptoms this February

This February, Ovarian Cancer Awareness Month, Cancer Council Queensland is calling on Queensland women to get in the know – to understand symptoms of the disease and to give themselves the best prospects for surviving it.

Ovarian cancer is one of the hardest cancers to detect and is the leading cause of death from gynecological cancer, with less than half of all women diagnosed surviving five years.

Cancer Council Queensland CEO Ms Chris McMillan said it was important for all women to get to know the symptoms of ovarian cancer and to be cautious of overlooking the warning signs.

“There is currently no effective screening test for ovarian cancer – so keep it on your radar, know the symptoms, and seek advice from a health professional if you’re concerned about your cancer risk,” Ms McMillan said.

“In Queensland each year, around 285 women are diagnosed with ovarian cancer and about 170 women die from the disease.”

Rebekah Utting, 31, said she was shocked to be diagnosed with ovarian cancer in April last year.

Ms Utting who lives in Brisbane, but works a fly-in-fly-out employment roster in Central Queensland, said it was whilst she was away for work that she experienced abdominal pain one morning.

“Suspecting appendicitis, I called an ambulance and was transported from Middlemount to Dysart Hospital. Needing surgery, I was transported by Royal Flying Doctor Service to Mackay Base Hospital. I went into surgery in Mackay confident this was a simple appendix removal,” she said.

“I woke up in the gynaecology ward where it was explained to me that my appendix was healthy, so they left it in there; instead they removed an 18cm ovarian cyst. 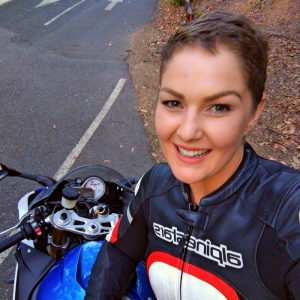 “About a month later I received a call to say the tumour board had reviewed the histology of the cyst and determined it to be a germ cell carcinoma; by this time, I was back at work in Central Queensland, very remote and away from my support network.

“Initially I was in shock. I closed the door to my office and cried for a little while and then called my partner and my brother to tell them.”

The next step was treatment. Ms Utting underwent a second surgery in May, and then began three BEP chemotherapy cycles in June, lasting nine weeks. She reached out to loved ones and cancer support professionals during this time.

Now continuing her survivorship journey – as of December 2018, her tumour markers are within a normal range and there is no evidence of abnormalities – Ms Utting is committed to raising awareness for ovarian cancer, urging other women to get familiar with the symptoms of ovarian cancer.

“Do not ignore small signs that something is not right. Life gets in the way of these niggles and pains that sometimes inexplicably correct themselves. I am fortunate to have detected this before it spread to other areas of my body,” she said.

Ms McMillan explained that ovarian cancer can be very difficult to diagnose early because symptoms can be vague and similar to other common illnesses and that was why the organization is urging all women to be vigilant.

“When you have symptoms that are new for you, have persisted for two weeks or more and you have them on all or most days, then it’s time to see your doctor,” Ms McMillan said.

“If Queensland women have questions or concerns regarding ovarian cancer, they should visit their GP.”

More information about Cancer Council Queensland and ovarian cancer is available via 13 11 20 or cancerqld.org.au.