It wasn’t just her death, it was the fact that she had a very difficult clinical course and much of the difficulty came from medicines. I just saw opportunities really to make a difference in that space.
– – Professor Ross McKinnon, Beat Cancer Professor, Flinders University

Dedicated to a better way

Diagnosed with an aggressive breast cancer at only 38 years of age, Professor McKinnon’s wife, Wendy, sadly passed away only 15 months later. Watching the way the treatment impacted her quality of life during this short time, was heartbreaking. 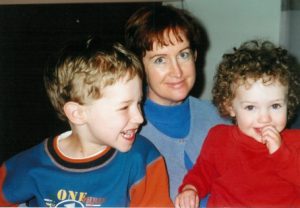 Wendy with Lockie and Jessie

Because of this, Professor McKinnon made a commitment to devote his life’s work to finding better ways to treat people with cancer.

“She was pretty much unwell from the time she was diagnosed,” says Ross.

“She had chemotherapy, which was standard care. She responded very, very well as aggressive tumours often do.

“But then her cancer became resistant after the fourth cycle and so then she went into this pathway of new drugs and managing the side effects. It became quite distressing.”

The drugs made it so that it was really quite brutal.

“I responded to that by saying we need to do better, we need to have not just better drugs but use the drugs we have in a much more optimal fashion.”

According to Professor McKinnon, one of the most exciting research projects he’s involved in is the precision medicine program. Its aim is to try and optimise targeted therapies to achieve better outcomes for cancer patients.

“It’s not that long ago that all we had was chemotherapy,” says Professor McKinnon.

“We now have a lot more in the way of a ‘therapeutic arsenal’ and one of the exciting things for the future of cancer is how we use that to the greatest effect – to use new combinations of therapies from the things we’ve already discovered.”

Professor Ross McKinnon and his team at the Flinders Centre for Innovation and Cancer.

Help researchers like Professor McKinnon save those you love

Thanks to your generosity, Cancer Council can fund important research like that being done by Professor McKinnon and his team. Please give generously today.

Cancer Council Queensland also offers support and information to all Queenslanders affected by cancer. If you have been affected, or know someone that is, we’re here to help. For information and support, phone 13 11 20, Monday to Friday.